Several advises have been scattered everywhere bombarding people with the importance of saving.

While it’s really prudent to form that habit of saving, to make spending appear as  a big NO-NO is something I also don’t encourage. Unfortunately, some people overdo the act of  saving to the point that they miss the entire point of it.

And so to make some balance, here I am now telling you to do the exact opposite – for you to spend.

But why become a spender?

One key reason   – to enlarge your Psychological Wallet.

What is Psychological Wallet?

I first bumped into this concept from Bo’s book – 8 Secrets of the Truly Rich.

(There’s an entire section in that book with eight chapters covering this topic alone).

Your psychological wallet is basically what’s commonly called as your money comfort zone.

It dictates the level of wealth you can be comfortable with.

But here’s the principle: Your physical wallet will only grow to the extent of your psychological wallet.

Which means if you want to get rich, the first thing you need to do is to enlarge your psychological wallet.

Do you want everything free?

It’s a funny story highlighting the fact that people love things they can get for free.

I once had a very poor psychological wallet. I have already shared in my story that it has primarily stemmed from the the surroundings and people I’ve grown up with during my formative years.

In my first two decades of stay here on earth, I’ve grown up and lived with not-so-rich-people.

As a result, I never had a distinction between the poor and the rich. I only had one notion of wealth – and that’s the level I saw in my family and community.

I began to see that distinction in school seeing my classmates who could afford to have a complete set of school materials every start of school year.

You see I had all my education in public school. Whenever the start of school year comes, we’re asked to bring manila paper and cartolina to give to our teacher. They day after, I would feel an inner shame whenever I couldn’t submit one while seeing my other classmates having so much to give . At that point, I realized that people live different levels in life.

Until in college, I was surrounded by a majority of not-so-rich people.

Of course I had also classmates who are rich- but coming from different lifestyles, it’s hard for me to get along with them. In the end, I only attracted people at relatively the same level of wealth consciousness that I had. In all those formative years,  my psychological wallet was stuck at the same low level.

At one point, I had this orgmate who was having a hard time finding money for his tuition. The semester was then about to start.  Fortunately for me, my tuition was covered with my scholarship.

After knowing his predicament, I offered the money I received my scholarship to him which he promised to pay.

That was actually my first time to lend few thousands to someone. I was then left with an amount just enough for my own expenses. (My mother actually scolded me when she knew about it).

But now, I realized that I did that decision not so much because I wanted to help the person but to tame a struggle inside due to my poor psychological wallet.

It was just uncomfortable for me to have money lying on my hands.

So whenever I had money, I would find ways to get rid of it.

But since I was not trained to be a spender either, I looked for other ways to let it go out.

It was fortunate for that guy that I happened to know his situation. (Until now after more than three years, it’s not yet fully paid, haha)

The shock of my life came!

Until I landed on my first job.

There I met people from private universities whom I realized were living breathing testimonies of the line between the rich and the poor.

I was shocked when I saw them spending more than 50 pesos for a lunch. WHEW!

For me, that 50 could already provide for one meal of our entire family.

(We’d only buy a kilo of rice and buy the rest with one serving of ulam).

It was hard for me to do the same.
Not because I wanted to save. But because I didn’t want to spend.

Again it’s because of my poor inner wallet behind the picture.

My psychology was telling me that I’m poor, and it’s not justifiable to spend that much.

Even though I was already earning more than enough for myself, my psychological wallet has not yet grown to the extent that it would tell me that it’s okay to spend that much.

I just couldn’t see myself in their situation that I couldn’t spend the way they spend.

But why expand your psychological wallet

Because you can only have something that your wallet can handle.

If you have a small wallet, chances are you’re going to aim for small money too.

If you have a bigger wallet, you’ll also aim for something bigger.

We simply cannot aim to be someone we cannot picture in ourselves.

I dawned on me that if I wanted to be a millionaire, I better become morecomfortable thinking about it a  thousand billion times.

It’s related with the concept of Level of Acceptance.

I remember a session in The Feast  (it’s the Sunday service I attend to).

Then nobody raises his hand.

Then the preacher added a little twist in the story:

“Imagine your child struggling his life in a hospital, and the doctor tells you that you would need a hundred thousand to extend his life.”

Everyone obviously then raised his hand.

What’s the difference? – It’s the level of acceptance that people have.

If people can accept to remain poor, without any hint of desiring to be rich, they will remain that way.

So what are the things that can help expand your Psychological Wallet?

List down the five people you’re spending much of your time with.

Estimate their monthly income, then get the average.

Chances are that figure would somehow be like your monthly income.

Simply put, if you’re spending all your time with low-earning people, you would never be exposed to the possibility of making more your circle of friends could never imagine.

Now that doesn’t mean you dump all your friend who are not earning really big. The lesson is to add friends to your circle who can expose you with the possibility of making big bucks.

It’s better to talk with actual people. While you can certainly search and read stories, there’s something magical with absorbing from someone in a personal level.

(2) Experience. You have to spend. Yes, you just have to do this.

One lesson learned I learned from T.Harv Eker’s Secrets of the Millionaire Mind is to set aside a fixed portion of your income for pure splurging purposes. Say 10% of your monthly budget.

Yes, splurge in any way you can with that amount.

And you have to spend the entire amount every month no matter what.

When I did this ritual, I was in effect giving myself the hint of living the rich life.

I was opening myself up to great possibilities.
Ultimately, I was freeing my mind from scarcity mentality – which leads me to the third point:

I remember reading a comment  in facebook one time complaining about the membership fee of the Truly Rich Club.

He says the membership fee is expensive. 497 a month.

But the problem is the tendency for a person to contain himself in a small container as small as his mentality.

I have long learned that the moment that you say that something is expensive and believe it, your mind automatically shuts down instead of thinking of ways of how you can afford it. You immediately box yourself with your own poor mindset.

But if you allow yourself to think big, and let your mind work its magic, coupled with desire, focus and action, there will be a much greater chance that you can afford to get it.

So the next time you see something you think is expensive, tame the scarcity mentality inside and let your mind do its natural job in making things happen.

Make it a sweet personal journey

Believe that saving doesn’t necessarily mean depriving yourself of the things you enjoy.
Spend for yourself so you can save for yourself.

Enjoy the journey to your financial freedom!
Neve rush it, and reward yourself from time to time.

Trust me, more doors will be opened.. not because they were not there before
but because you became much better to see them.

Have fun investing (while enlarging your psychological wallet),

PS. Do you want to invest and earn in US stocks like APPLE, FACEBOOK, AMAZON or GOOGLE?

Investing in global stocks means checking stock markets of other countries, which allows you to practically diversify in your portfolio. It's very similar to investing in local stocks, but since we're expanding on geography and other asset classes, we now have more stocks to choose from.
Click here - Walkthrough on Global Investing to join. It's FREE sign-up. 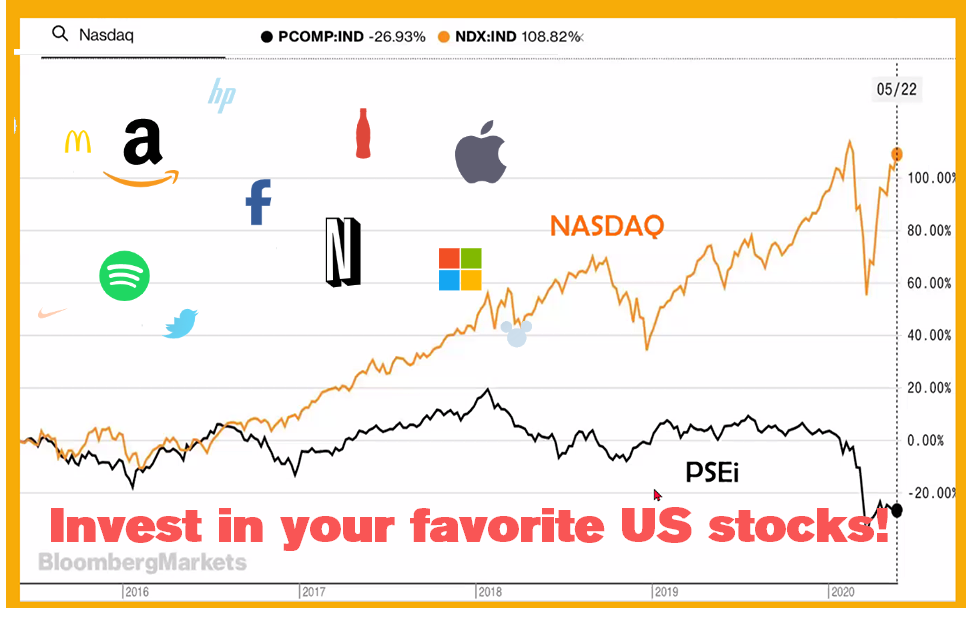 Do you want to receive STOCK PICKS and other lessons on money management & business ideas?

If you are stilll a new investor, you would not want to miss watching this stocks investing practical guide for newbies. Make sure to Subscribe to my YouTube channel for more.
Click here.
Get your quick guide for beginners how to start investing in the Philippine stock market and more practical trading tips and tricks. Simply sign-up below (it's FREE!)

2 thoughts on “Why it is okay to be a spender”

Get started with this video!